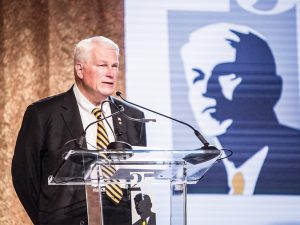 … And more to come

John C. Hitt ’62 was honored in March for 25 years of service as president of the University of Central Florida. He and his wife, Martha (Halsted) ’60, joined the UCF family March 1, 1992. Under his leadership, UCF made remarkable strides in academic quality and diversity, became a major metropolitan research university, and established a medical college. The first in his family to attend college, Dr. Hitt knows first-hand the power higher education wields to transform lives. 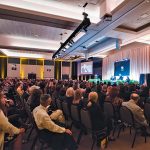 During a packed celebration at UCF’s Student Union, community leaders and members of the UCF family praised the Hitts for their impact on the university and the entire Central Florida region. “Some would say we have been lucky,” the UCF board chair said at the event, calling President Hitt “one of the most important leaders, in my opinion, in all of Central Florida in the past 25 years. I choose to believe we have been blessed to have Dr. Hitt and his not-so-secret weapon, Martha, leading our university.” 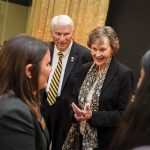 The celebration concluded with the Hitts receiving UCF’s Honorary Alumni awards, which recognize outstanding service and philanthropy to UCF. “Today, on the 25th anniversary of the black and gold’s most dynamic duo, a grateful community knows we are better because of you,” the chair elect of the UCF alumni board and a member of Hitt’s first class of graduates in 1992, said. “We also know that you are better because of each other. And, because you have made us part of your family, it is with great joy and pride that we take the step today of officially making you part of ours.” In the future, Honorary Alumni awards will be given in the Hitts’ honor.

“While I have learned many things during my tenure as president, one stands above all others: No one succeeds on their own,” Dr. Hitt said to the faculty and staff of UCF. “Together, we have created a culture in which we do more than wish for success. We plan for it, then make it happen.” 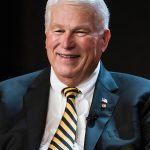 Hitt has greatly increased students’ access to a high-quality, affordable education. UCF’s enrollment has tripled during his tenure. He has conferred nearly 250,000 degrees, accounting for more than 80 percent of all degrees awarded since UCF began classes in 1968. Through the years, President Hitt has been recognized as the Orlando Sentinel’s Central Floridian of the Year, among America’s 10 Most Innovative College Presidents (2015), and is consistently listed among the Orlando Sentinel’s 25 Most Powerful People in Central Florida.

“Martha and I are humbled by the kindness you have shown us regarding this anniversary,” President Hitt told those assembled. “I’m standing here marveling at how these past 25 years have passed so quickly … and joyfully. … Like with all anniversaries, today’s is infused with nostalgia. It’s a potent and powerful feeling. But more powerful is the belief I have in the future. Our future. And my belief is that for our beloved UCF, the best is yet to come.”

Photos courtesy of the University of Central Florida