At the Helm: Alumnus is New Trinity University President 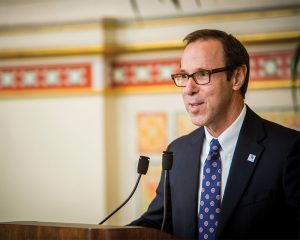 Danny Anderson ’80 was elected to serve as Trinity University’s 19th president in December 2014 in a unanimous decision of the university’s board of trustees. He assumed the presidency in May 2015. He had served as the dean of The University of Kansas College of Liberal Arts and Sciences since 2010 and had been a member of that university’s Spanish faculty since 1988. He served in several leadership roles for his department as well as associate dean in the College for Interdisciplinary Programs, vice provost for Academic Affairs, and interim provost and executive vice chancellor.

A native Texan, Anderson was born in Houston and lived many years in Rusk, Texas. After earning a degree in Spanish at Austin College, he earned master’s and doctoral degrees in Spanish at The University of Kansas. An award-winning teacher, he began his academic career at The University of Texas at Austin in the late 1980s, teaching Spanish and Portuguese, before returning to Kansas in his faculty role.

In early visits with students at Trinity, the new president shared that international education experiences while at Austin College helped him realize that “any one of us, no matter where we come from, can become connected to events in the world, and we can come to see how we are already connected to them.” 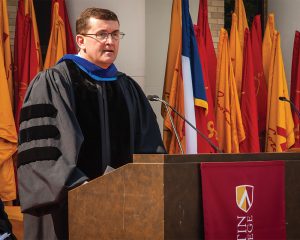 A Career of Service

John Williams ’84 was recognized in February by Austin Presbyterian Theological Seminary with the Austin Seminary Association Award for Distinguished Service to the Church. One of three alumni honored, he earned a Master of Divinity degree at the seminary in 1987.

Since its founding, the ACtivators program has involved 520 Austin College students who have traveled over 161,000 miles to plan and lead 604 local, regional, and national ministry events involving more than 48,000 children, youth, college students, adults, and senior citizens.

Williams earned a Ph.D. in religious studies from Southern Methodist University in May 2004, with a dissertation topic of “Between the Labyrinth and the Abyss: Presbyterians and Schism, 1837-1861.” Before joining the Austin College staff, he served five years as parish associate at North Park Presbyterian Church in Dallas. John is married to Linnea, a Head Start teacher and former PCUSA children’s curriculum writer; they are the parents of Emily and Joseph. 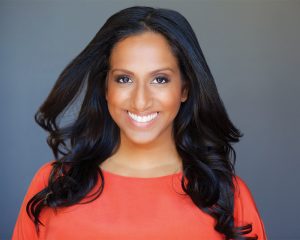 Taking the Lead at LIVESTRONG

Chandini Kumar Portteus ’00 was named president and chief executive officer of the LIVESTRONG Foundation in April. She previously served nearly 10 years with Susan G. Komen, where she was chief mission officer, responsible for strategy and programming around research, community health, public policy, and global programs.

“I am excited by the opportunity to lead such an iconic, dynamic organization, whose mission is clear and direct—helping those affected by cancer now,” Chandini said in a foundation announcement of her position. “LIVESTRONG has always been the voice of the survivor, and I am energized by the team’s focus on innovation and patient-centered cancer care. I am honored to help shape the Foundation’s next chapter with the LIVESTRONG Cancer Institutes and look forward to working with such a committed and creative community of survivors, supporters, and advocates.”