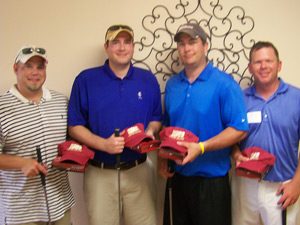 The annual athletics reunion and award presentation is called “Legends” for a reason—Austin College players and coaches have shared some amazing moments during the College’s athletics competition. Many alumni also have gone on to remarkable careers and made significant contributions to their communities.

The legends came home again in July 2011 for a weekend of friendship, awards, golf, and reminiscences.

Gather former athletes and some stories grow more “legendary” each year. Even without the “stretching” sometimes evident, no Austin College team has rivaled the 1981 football team in achievement. The NAIA National Championship football team, coached by Larry Kramer, brought home the only national title in Austin College history. The team was inducted into the Austin College Athletic Hall of Honor, with a large number of teammates on hand.

Jerry Bishop ’66 was honored with the Coach Joe Spencer Award for Meritorious Service and Lifetime Achievement in Coaching. A four-year letter winner at quarterback for the Kangaroo football team, Bishop still holds virtually every passing record in Austin College history. From serving as a graduate assistant at his alma mater, he advanced to executive administrator for the entire Richardson ISD.

The winning foursome of the tournament was Cory Six, Stewart McKenzie, Trey Schalk, and Troy Schiermeyer, all Class of 1991.