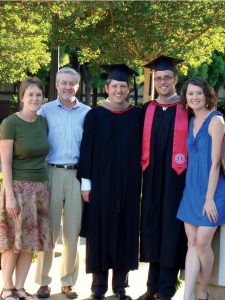 Jason Brewster ’94 wasn’t aware of any Austin College alumni having attended Stanford Graduate School of Business when he applied for admission, but Mike Dorsey ’03 was a fellow student there. Both completed their degrees in 2010: Jason earning a master’s degree in management and Mike completing an MBA.

Jason is working on a startup in the legal field, FairDocument.com, designed to improve affordability and efficiency for clients working with lawyers. The company recently launched a consumer site that allows users to receive free quotes to prepare a comprehensive estate plan with an attorney, often for half the cost of engaging with an attorney through traditional means. The firm works with attorneys in several states. Jason and his wife, Jennifer, live in Palo Alto, California, with their daughter and three sons, ages 4 to 13.

Michael is working on two major projects. By day, he works in mergers and acquisitions advising at a boutique investment bank that specializes in assisting startup technology companies to be acquired by larger tech companies. By night, he is building his third company, DataFox, which is a tool for venture capitalists to monitor their portfolio and research prospective investments. He also is a close advisor for FounderSoup, a program Mike founded at Stanford to help would-be entrepreneurs meet fellow students and alumni interested in co-founding companies. Mike’s wife, Joan Youngblood, works at Stanford in a class called “Design for Extreme Affordability.” Pictured left to right are Cindy Smith Youngblood ’81, Tom Youngblood ’81, Jason Brewster, Mike Dorsey, and Joan Youngblood Dorsey ’06. Tom and Cindy are Joan’s parents.