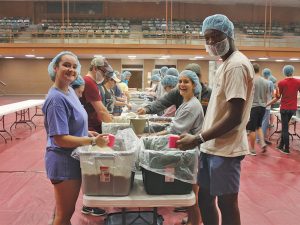 As incoming freshmen, members of the Class of 2017 were the first to participate in what has become a regular part of freshman orientation: “First We Serve,” a two-hour volunteer project.  Students entered Sid Richardson Center in Mason Athletic/Recreation Complex to find row after row of tables holding containers of rice, soy, and dried vegetables plus measuring and packaging tools that would result in meal packets for hungry children and families. The ingredients were supplied by Kids Against Hunger, a nonprofit organization that distributes the food packets in more than 60 countries.

Since the seniors were the first to participate in the project that this year resulted in preparation of more than 30,000 meals, members of the class decided they wanted one more opportunity to help. They scheduled “Before We Go” for a Sunday afternoon in April and packed more than 15,300 meals—with significantly more packages prepared per person.

Organizers hope to see “Before We Go” become an annual event for seniors.

Next: Another Class Crosses the Stage