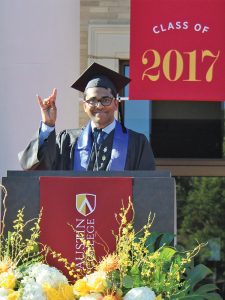 Commencement is always exciting for seniors and their families, friends, classmates, and faculty. The May 2017 event was no exception. For once, the week was fairly free of the threat of storms for the Sunday morning exercises, and thousands of wellwishers gathered to celebrate the achievements of the Class of 2017 and 15 Master of Arts in Teaching graduates.

In addition, President Marjorie Hass presented honorary doctorate degrees to Dr. Michael Sorrell, president of Paul Quinn College in Dallas and the Commencement speaker; the Reverend Jan Edmiston, co-moderator of the Presbyterian Church (USA) and Baccalaureate speaker the previous evening; and Patti Amanda Birge Spivey, a senior member of the College’s Board of Trustees who had a significant career in public service.

Ganesh Maniam of The Woodlands, Texas, presented the senior address on behalf of his classmates. Completing a major in business administration and minors in leadership studies and healthcare studies at Austin College, he began an MBA/M.D. dual-degree program at Texas Tech University in June. 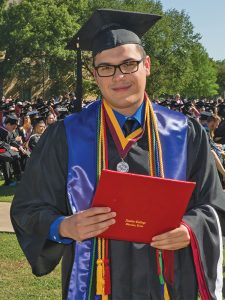 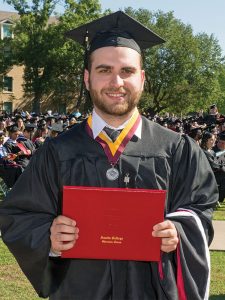 Each year, the faculty selects two outstanding graduates for special recognition at Commencement, with no distinction between them, as recipients of the J.C. Kidd and J.M. Robinson Memorial  Scholarship Medals. Business and mathematics faculty members surely were smiling as the Kidd Medal was presented to Alejandro Moran of Sherman, who majored in economics and mathematics with a minor in Spanish, and the Robinson Medal went to Aktan Eminovski of Pottsboro, Texas, who completed majors in business finance and mathematics. Both graduates plan to pursue doctorates in economics, Alejandro specializing in econometrics and international economics with a goal to work as an economist, possibly in the government. Aktan remains undecided about his career choice. Both students said their favorite Austin College course was “Mathematics of Finance” as it involved two of their favorite interests; Aktan said it paired advanced  mathematics and the stock market; Alejandro referred to the combination of his interest in finance and economics and his passion for mathematics.

Honorees above were joined by others to make up the 2017 Commencement Platform Party. Left to right are David Corrigan ’81, Board of Trustees chair; Patti Amanda Birge Spivey; Marjorie Hass; Michael Sorrell; John Williams ’84, Austin College chaplain; and Jan Edmiston.