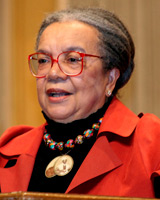 Following a welcome from Austin College President Marjorie Hass, the campus convocation began with a Jefferson Elementary Honor Choir performance in honor of Edelman’s visit. Following the children’s musical number, Edelman was introduced by Linus Wright ’49. Wright, a member of the College’s Senior Board of Trustees, is a former superintendent of Dallas Independent School District and was appointed Under Secretary of the Department of Education by President Ronald Reagan. He also served as principal of Jefferson Elementary early in his career.

Edelman offered advice particularly directed to students in the audience. “I think all of us should be challenged to redefine success in America … asking not ‘how can I find myself,’ but ‘how can I lose myself in service to others?’” she said.

Edelman spoke on her upbringing and the influence her parents had on her beliefs. She exhorted the audience to take similar care in what they teach the next generation. “As a mother and grandmother, I think it is very important that we adults be clear in what we think is important,” she said.

Edelman shared sobering statistics on child poverty, poor education, and a lack of health care and insurance coverage, particularly in Texas. She also spoke of high rates of incarceration, drug use, and teenage pregnancy that often create a continuing cycle of poverty and crime. “It is reprehensible that states spend three times more on prisons than they do on education,” Edelman, the longtime child advocate explained.

“We must and can do better,” she said. She closed with specific advice for young people in the audience, including:

See video of her Dallas Lecture. The video begins with scenes from Austin College students in service abroad. The Introduction of Mrs. Edelman begins at 17:15 and Mrs. Edelman’s Address begins at 20:35. [Click the cursor on the timeline to advance.]

The Austin College Posey Leadership Institute was founded in 1995 to give aspiring student leaders extraordinary opportunities to train for lives of leadership and service. The Institute provides a venue for dialogue and study of leadership that engages interested students and professionals in thoughtful investigation, demonstrated service, and critical reflection on the roles, responsibilities, and actions of effective leaders in society.

More about Edelman’s visit will be included in the Summer 2012 Austin College Magazine.