Reliving Memorable Musical Days on the Rhine From College Years 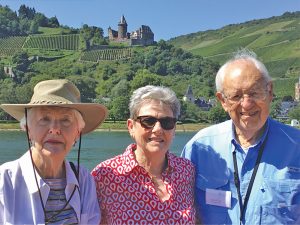 Mike and Mary Thulemeyer Murray, both ’58, and Joyce and David Fox ’57 spent a day on the Rhine River in August 2017 as part of a Rhine River cruise from Basel, Switzerland, to Amsterdam,  Netherlands, with lovely stops in France and Germany along the way. The fact that Mike, Mary, and David had spent a day on the Rhine, from Bonn to Mainz, as part of the Austin College  European Choir Tour 60 years previously added much to the charm of the moment. Pictured, left to right, are Mary, Joyce, and David; Mike was the photographer. This is just one of many trips the two couples have enjoyed, including vacations to Alaska, Canada, Mexico, Switzerland, and Vail.

ALUMNI: Were you on the 1957 European Choir Tour? Do you have photos you can share? Please send to editor@austincollege.edu with Choir Tour in the subject. Include any memories and description you can. 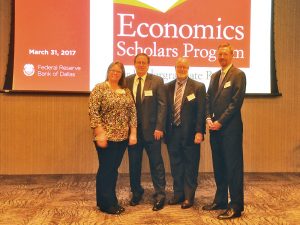 The Students Are Now the Faculty

Tara Larson Brown ’01, Steven Nivin ’89, and Adam Jones ’02 posed for a photo with Daniel Nuckols, Austin College’s John T. Jones Chair of Economics—and their former teacher. The alumni were attending the March 2017 Economics Scholars Program for Undergraduate Research at the Federal Reserve Bank of Dallas, which brings economists, faculty, and students from around the country each spring. Austin College and the Federal Reserve Bank began the conference in 2007 to foster the involvement of undergraduate economics students in all facets of research. Nuckols helped the alumni enter doctoral programs, and now all three are economics faculty themselves: Tara at the University of Texas at Arlington, Steven at St. Mary’s University in San Antonio, and Adam at the University of North Carolina, Wilmington. Several Austin College students and faculty participate in the conference each year.

Emily Coufal Vann ’00 serves on the advisory board for Coins for Change, a nonprofit organization that works with the Maasai tribe in Amboselli, Kenya, and sends 39 girls and boys to secondary  school. In August 2017, Emily traveled to Amboselli with a group to work with Chief Mary Kahingo, the first female chief of Kenya, who runs a safe house for girls escaping early marriage and is also a member of the Coins for Change board. On the trip, the group was able to buy a new water tank, secure eye surgery for a young girl, and gather school and toiletry supplies for the school children. Emily suggests the area could be an amazing JanTerm or Global Outreach opportunity for Austin College students. 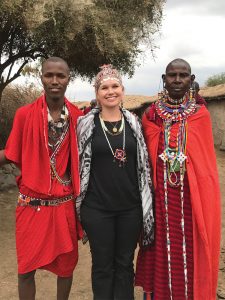 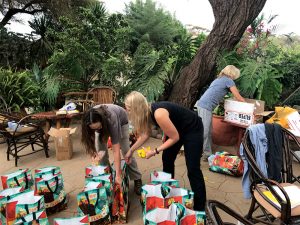 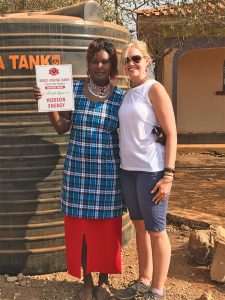 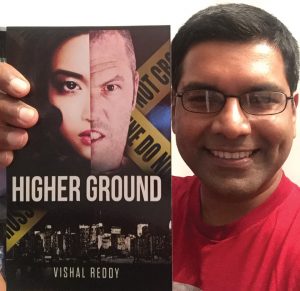 With two books published in the last year, Vishal Reddy ’02 has paused his career in finance to pursue his lifelong passion as a writer. Vishal lives in New York City and is working on the next installation of his fictional anthology series Equinox Mysteries. The first book, Higher Ground, is about the mysterious death of a long unemployed Detroit autoworker. Subsequent books
will feature different settings and characters, but each book contains the common hook of the first 48 hours of the murder investigation and last 48 hours of the victim’s life. The next book in the  series, Take Five, takes place in Silicon Valley and will be released this spring. His books are available through Amazon.com.

“My goal in writing is to put this unique concept to paper while addressing social issues through my work,” Vishal said. “Higher Ground tackles issues such as working-class struggle,  unemployment, and family strife, all told through the lens of a suspenseful murder mystery. Future books in the series will tackle other relevant societal issues in the same way, all while delivering
well-crafted entertainment.”

He also self-published One Hour Investor: The Beginner’s Guide to Investing in the Stock Market, under the pseudonym Russell Elroy. This non-fiction work teaches financial literacy, drawing on Vishal’s background and education. He completed his MBA with a concentration in finance at the Zicklin School of Business at Baruch College in New York in 2016.

“I am interested in becoming a financial analyst on Wall Street, though any major success I have with my books may sideline those plans,” Vishal said. “Until then, I will keep striving to go as far as I can in both the fields of literature and finance.”