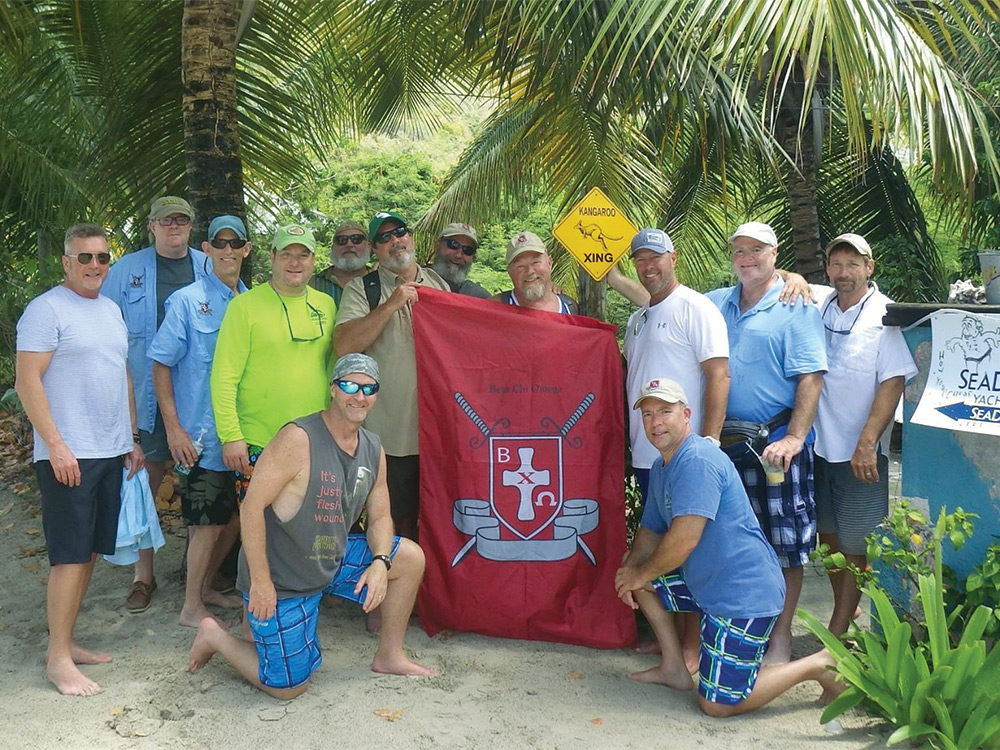 Pictured, left to right, are Bart Miller; Kurt Matt; John Clark; Kevin Spencer; Ben Danner (who attended Austin College his freshman year then transferred to West Point, was a tank  commander in the first Gulf War, and retired as a colonel a few years ago); Don Tafelski; Mike Davis; Jimmy Curry; Jason Schiflett (who attended only his freshman year but was part of the 1981 NAIA championship football team); Sam Hockaday; Mike Watson (a friend); and kneeling, at left, Bill Leonard; and at right, Greg Garrison.

For 39 years in a row, one group of Austin College friends has made the time for “Retreat” every year, sometimes for some adventurous travel. The most recent trip was to the British Virgin Islands in summer 2017. Bill Leonard ’83 sent this photo of friends who developed and continued lifelong friendships that have taken them through births, deaths, marriages, and divorces … just experiencing life together. “I heard it said once that ‘lots of things in life you don’t get to choose, but friends—they are one of the true great choices you can make.’ I’ve chosen my friends very wisely, indeed,” Bill said.

The group, Bill said, ranges from 10 to 18 each year and includes attorneys, coaches, teachers, CPAs, fence guys, an airline pilot (former USAF pilot), real estate professionals, wealth managers, dentists, business owners, a retired Colonel (U.S. Army), and folks who work for corporate America. While it may have started out as a fraternity gathering, it’s turned into an invitation to anyone  who wanted to join them—siblings, friends, or members of other fraternities. “Frankly,” Bill said, “as the years pass, we’re just glad to see each other.”

They stay near or in Texas one year and go farther afield the next. They’ve traveled to Arkansas, Louisiana, Colorado, New Mexico, “Old” Mexico, the Bahamas, Montana, and St. John. Drake alumnus Peter Mandt-Rauch ’81 assisted with the Bahamas trip. Smaller groupings have arisen: Mike Davis and John Clark hiked in the Himalayas; Bart Miller and Clark trekked around Machu Picchu.

Ben Danner has the distinction for the longest travel to get to their gatherings. In 1991, he traveled back from Iraq/Kuwait after the First Gulf War; in the mid-1990s, he came from Egypt and Sinai when he was stationed there with Multinational Force and Observers (MFO).