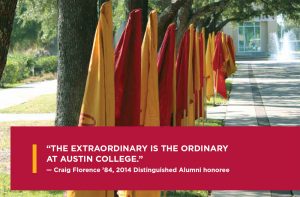 Whether triggered by near-perfect weather, a football program on the rise, the draw of the ’Roos Who Write Conference, or nostalgia for a bit of time shared at the home base of ’Roo Nation, Austin College was definitely the place to be for Homecoming 2014. Prior years’ attendance records were eclipsed at nearly every event of the weekend.

All the traditions were in place—the Alumni Awards dinner honoring alumni and faculty, the Kappa ’Roo Run, the Golf Cart Parade, tailgating in the Outback, the Big Tent Celebration, Homecoming Worship Service, sports, and more. The Alumni College was much expanded this year by the ’Roos Who Write Conference coordinated by Carol Daeley, Austin College Henry L. and Laura H. Shoap Professor in English. 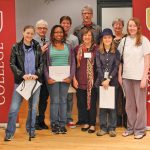 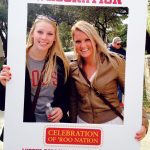 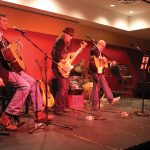 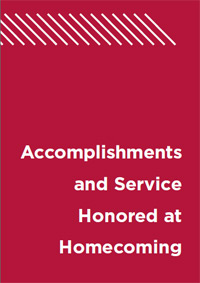 Austin College honored four graduates with Distinguished Alumni honors during the annual awards dinner at Homecoming. The awards recognize those who have distinguished themselves in their professions and in their communities, exemplifying leadership and ethical standards in their interactions. Honorees model the accomplishment, spirit of service, and broadened perspective fostered by the Austin College experience, and support and advocate on behalf of the College. First Decade Award recipients are selected on the same basis, but for accomplishments within 10 years of graduation. Austin College President Dr. Marjorie Hass and Kirsten Brandt James ’85, Austin College Alumni Board president, presented the awards. 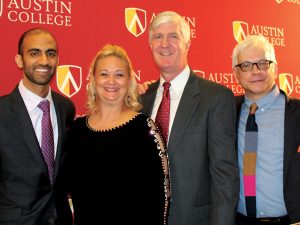 Craig Florence ’84, of Dallas, Texas, is a partner and trial attorney with Gardere Wynne Sewell in Dallas. Recognized by Chambers USA: America’s Leading Lawyers for Business, Best Lawyers in America, and Texas Super Lawyers, he holds an AV Preeminent Peer Review Rating. Active in his community, he has served on numerous boards and as chair and board member for Carter BloodCare. He has served Austin College on the Alumni Board and is a member of the Board of Trustees.

Tara Jo Gibson Myers ’78, M.D., of Jersey Village, Texas, has practiced hospital-based emergency medicine for nearly 20 years, though she began her medical career in internal medicine. She has held many leadership roles within her profession, including medical director for several services and performing as state commander for the Disaster Medical Assistance Team. She also has been active in community events and has earned national and international honors in competitive ballroom dancing.

Kim Powers ’79, of New York City, has been a member of the ABC News team for nearly 20 years and now is the senior writer for 20/20. This year, he received the Edward R. Murrow Award for “continuing excellence”—just one of many awards. Also an author of a memoir, a novel, and a screenplay, he was named one of the “Out 100” by Out Magazine, a prestigious distinction in the LGBT community. Kim earned a Master of Fine Arts at Yale School of Drama.

Abbas Ravjani ’04, of Washington, D.C., was selected for First Decade Distinguished Alumni honors. Since graduating from Austin College he has had an impressive array of experiences, including selection as a Truman Scholar, a Paul and Daisy Soros Fellowship for New Americans, and a Center for a New American Security Next Generation National Security Leader. A graduate of Yale Law School, Abbas spent two years working for the U.S. House of Representatives Permanent Select Committee on Intelligence, and since 2012, has been an attorney in the U.S. State Department. 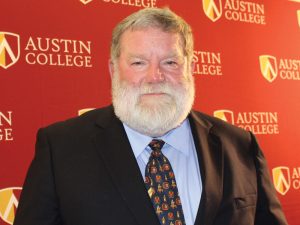 Billy Core ’76, of Dallas, Texas, received the 2014 Heywood C. Clemons Volunteer Service Award, given to honor continued service to the College and named for longtime Austin College Board of Trustees chair, the late Heywood Clemons. Now a member of the Alumni “A” Athletics Board, Core has been a regular presence at Austin College football games for several years and has donated many hours and many resources serving as the “official” pit master of the Austin College Outback. 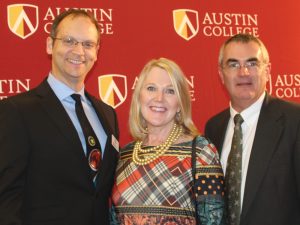 Austin College’s Steven Goldsmith, dean of Sciences and member of the biology faculty since 1993, and David Baker, who joined the physics faculty in 2000, were co-recipients of the Cindy Bean Service to Alumni Award. Both award-winning faculty have offered guidance to hundreds of alumni and were recognized particularly for their work in the development and opening of the College’s IDEA Center and the Adams Observatory, for which Baker serves as director. 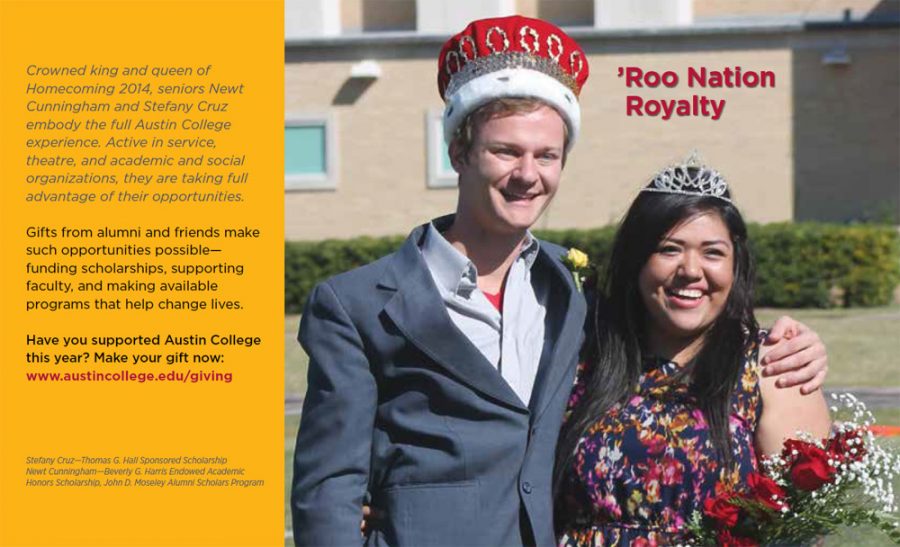