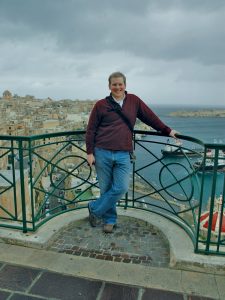 Philip Barker, Austin College associate professor of political science, has been named a U.S. Fulbright Scholar and received a grant to teach at the University of Malta for Spring Term 2015.  He will teach U.S. foreign policy and conduct research on the role of Catholicism in the Maltese political process and in Maltese national identity, a continuation of his research on the role of religion in Europe.

He offered an example of Catholicism as a key part of Polish and Irish national identity, while France, despite being  predominantly Catholic, has a more secular notion of nationalism. “When you look at Europe from this perspective, Malta is a fascinating case,” Barker said. “It has a long and fascinating history that is intertwined with Christianity. Saint Paul was shipwrecked on the island, and the Knights of Malta controlled the island for hundreds of years. As a result, it is one of the most Catholic countries in the world.” He added that 98 percent of the Maltese people are Catholic; Roman Catholicism is taught in the schools; abortion is illegal; and divorce only very recently was legalized.

Having led a January Term course in Malta in 2012, Barker, pictured above in Malta, is excited to learn more about the nation. “Of course, it doesn’t hurt that Malta is a group of fantastically beautiful Mediterranean islands,” he said.

Barker is on sabbatical for the spring term. His family will accompany him on the stay.