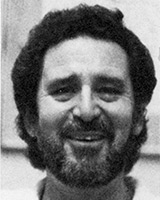 The Austin College community was saddened by the death of retired faculty member Dr. Nelson DeVega on October 25, 2015, in Houston, Texas. Dr. DeVega joined the Spanish faculty in 1973 and retired in 1996 as professor of Spanish.

Members of the faculty commented on DeVega’s passion for teaching, his booming voice and colorful personality, his humor, and his commitment to students. Maria Cecilia Salisbury, a former adjunct faculty member, said, “Nelson loved the culture that came with the language and loved for the students to learn about it. With unending energy and enthusiasm he encouraged the students to speak Spanish in every possible context and make use of every resource available.”

Jennifer Hudson ’90 wrote that Dr. DeVega had a major influence on her life, saying she often told others that he was the “impetus behind my entire professional career.” She added that every major job she’s ever gotten was because she speaks Spanish. Several years ago, she met with DeVega and some of his friends and family for brunch. “I don’t remember exactly what we talked about, but I hope I told him how much he meant to me. I hope I told him he was a wonderful mentor and what a great influence he had on my life.”