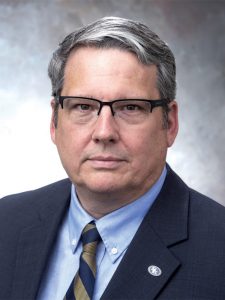 Thomas Newsom ’91 became President of Southeastern Oklahoma State University in April 2020. Before assuming the presidency, he spent a year at A&M Commerce as Interim Vice President for Student Success and Dean of Students. He previously spent five years as President of Mesalands Community College in Tucumcari, New Mexico. He had also worked in numerous leadership roles at The Art Institutes, including a six-year stint as President of The Art Institute of Dallas and four years as Vice Chancellor at South University. He began his career in Sports Information, working at Baylor University and Northwestern State University before serving as Director of Media Relations for the Southland Conference.