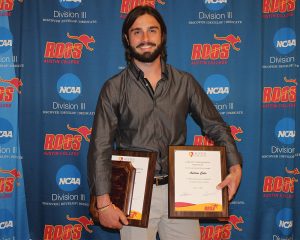 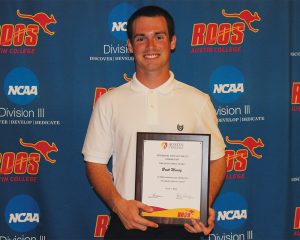 Andrew Celio ’15, a three-year starter at goalkeeper on the ’Roo soccer team, set a new single-game record with 22 saves during a game against Trinity University. His teammates selected him to receive the team’s Clayton Hustle Award and the Outstanding Player Award. The coaching staff selected him as the male recipient of the 2015 Robert T. Mason Sportsmanship Award.

Brett Moody ’17 set a new SCAC single-season record by finishing the year with an earned-run-average of 0.97, becoming the first starting pitcher with an ERA under 1.00 for the season. The previous record was 1.13. Moody’s teammates voted him the 2015 Cecil Grigg Outstanding Baseball Player.

The women’s basketball team added two names to the record books in 2014-2015 as Erin Riley ’14, Austin Teacher Program graduate student, and Christina Kime ’15 each surpassed 1,000 career points. This mark last was met in the 2009-2010 season by Katy Williams ’10. Kime, pictured with Coach Michelle Filander, was voted the 2015 Pat E. Hooks Outstanding Player by her teammates and earned a Slats McCord Senior Perseverance and Improvement Award from the coaches. 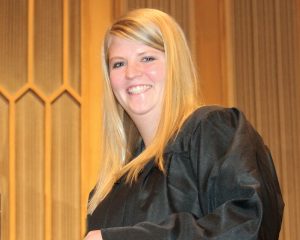 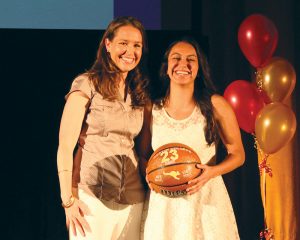 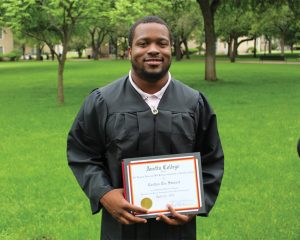 Tre Stewart ’15 was inducted into the National Football Foundation’s prestigious Honor Society this spring, adding to a long list of honors, including First Team All-SCAC selection and SCAC Academic Honor Roll. He was selected by his teammates to receive the Gene “Duke” Babb Award for Outstanding Football Player for 2015. A communication studies major with a minor in leadership studies, Tre is pursuing his Master of Arts in Teaching degree through the Austin Teacher Program. He received The Virginia Love and Bill Freeman Creativity in Teaching Award to
support that effort. 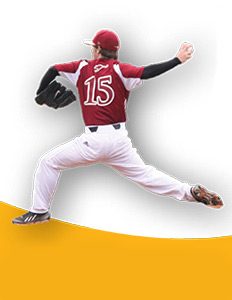 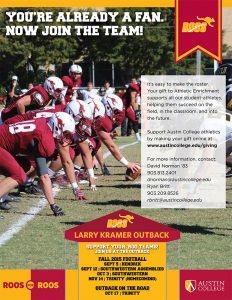 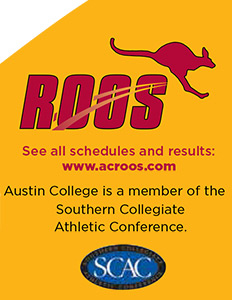