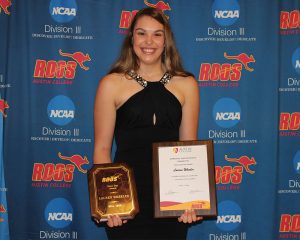 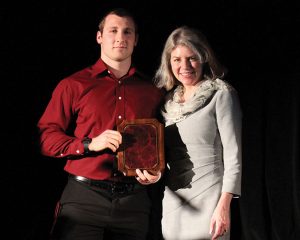 Ross, a three-year starting running back, earned numerous accolades in the 2014 season, including First-Team All-SCAC honors after finishing the season second in the conference in rushing yards, averaging 6.2 yards-per-carry. He also excelled off the field and was selected to the Capital One Academic All-America First Team, making him just the third player in Austin College football history to earn that honor (joining Gene Branum ’82 in 1981 and Joe Fox ’00 in 1999.) Ross is one of only 25 players in NCAA Division III to earn First-Team honors for the 2014 season, and one of seven juniors on the First Team. Ross also was selected by his teammates for the 2015 William B. Traylor Award for hard work and dedication. His 965 rushing yards in 2014 are the most of any Austin College player since Aaron Kernek ’01 in the 2000 season.

Wheeler has earned All-SCAC honors in each of her three seasons with the ’Roos. This year, she became the first swimmer in Austin College history to win an individual conference championship, taking the gold at the SCAC Championship Meet in the 100-yard backstroke. Her time of 57.99 in the event broke her own school record. She also received the 2015 Hannah Award for Outstanding Female Swimmer, an honor she has now received in all three years of competition at Austin College. 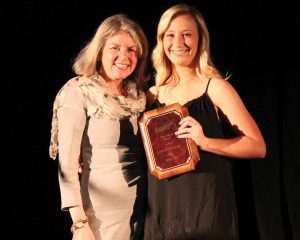 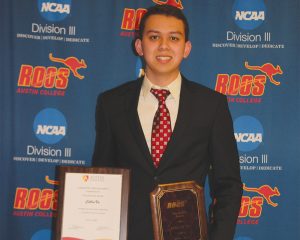 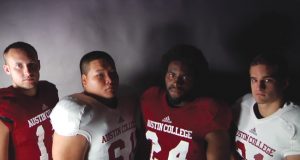 Taylor Greenwalt ’15 created videos for each of the ’Roo sports teams, unveiling new Adidas uniforms for the 2014-2015 academic year. His football video received a Council for the Advancement and Support of Education (CASE) Gold Award in the student video category. Taylor graduated with a major in media studies and a minor in German. See his winning video—and other team reveals—under Athletics on the Austin College YouTube channel.