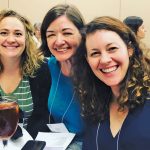 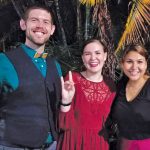 ’ROOS AROUND THE GLOBE: Nick Timmerman ’11, Suzanne Francis Timmerman ’15, and Mariam Chaudhry ’07 discovered fellow ’Roos in Kinshasa, DR Congo, at a British Embassy event. Nick is the performing arts teacher for middle and high school students at American School of Kinshasa, and Suzanne is local staff at the U.S. Embassy. Mariam and her husband, Nathan Cutler,  moved to Kinshasa in March 2019. Mariam was a Program Analyst with the U.S. Agency for International Development (USAID) for five years in Washington, D.C., prior to the move and remains  with the agency, where her husband is a Foreign Service Officer.

GOLDEN ’ROOS: Members of the Class of 1969 celebrated the 50th anniversary of their Austin College graduation during Commencement 2019 and officially joined the Golden ’Roo Society as  President Steven O’Day presented each a 50-year medallion. See more photos.