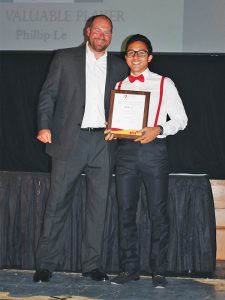 The 2017 Pete Cawthon and Gene Day awards recipients for Austin College’s male and female Athlete of the Year have more years of outstanding competition ahead of them. Men’s soccer player Phillip Le ’19 and women’s basketball player Bryce Frank ’19 took the top honors at the annual Athletics Awards Convocation. 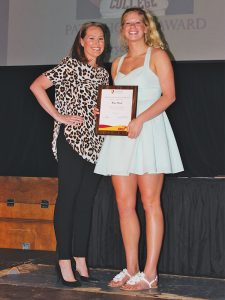 Le is an All-West Region performer, runner-up for Player of the Year, and an Academic All-Region selection. Frank is a First Team All-Southern Collegiate Athletic Conference player and one of three players in the conference to receive at least one vote for SCAC Player of the Year. 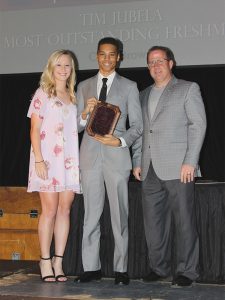 Swimming and diving athletes dominated the podium for Austin College’s Tim Jubela Outstanding Freshman Athlete Awards, with Sophie Garriga ’20 and Chris Brown ’20 taking the honors. Both swimmers broke numerous Austin College records this season, and each was the top performer for their programs at the Southern Collegiate Athletic Conference Championship Meet in February. Bob Filander has coached the ’Roos in the pool for four years.