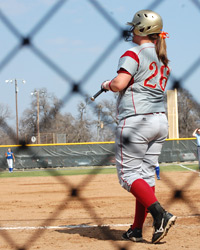 Kangaroo softball player Stefanie Faith ’11 already has made Southern Collegiate Athletic Conference history this spring by becoming the conference’s all-time home run leader, and the four-year starter at first base is poised to leave an even larger imprint in the SCAC record books.

With her second home run of the season, Stephanie broke the SCAC career home run mark and at press time, had 10 homers on the year, 37 in her career. She also has 45 RBIs, leaving her just six shy of tying the SCAC single-season mark. Those 45 RBIs also give her 148 in her career, needing just 10 more to tie the SCAC career mark.

In addition to her record-breaking performance this season, in which she also is batting .434 in 32 games, Stephanie became just the 19th player in SCAC history to reach the 150-hit milestone. Twice this season the three-time All-SCAC performer and two-time First Team All-SCAC selection, has been honored as the SCAC Player of the Week and looks to be one of the top contenders for SCAC Player of the Year honors, leading or near the top in virtually every statistical category in the conference. With eight regular season games plus the possibility of competing at the SCAC Conference Tournament, Stephanie looks to solidify herself as one of the most dangerous hitters in conference history.