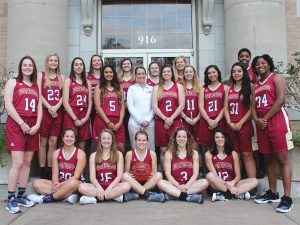 Women’s basketball began at Austin College in 1919 when women officially enrolled but continued with spurts and starts until the 1970s. “Young women from all over the country play on our  team, and they can look back and know they are a part of something much bigger than themselves,” said coach Michelle Filander. “Many women’s programs can’t boast such a chronology; it’s truly staggering to think how far the program has come.”