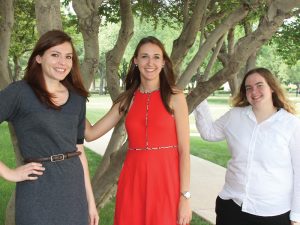 Class of 2014 graduates Madeline Akers, Lauren Tepera, and Alexandra England have been awarded Fulbright English Teaching Assistantship grants to teach English in Germany for the 2014-2015 academic year while serving as U.S. cultural ambassadors. Fifteen Austin College students have received the increasingly competitive Fulbright grants since 2010, and the College has been recognized as a top producer of Fulbright awardees. 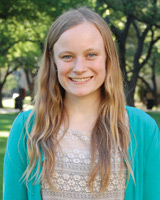 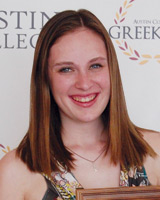 Sophie Higgs ’15 was one of 50 U.S. students to receive Udall Scholarships for students committed to careers related to the environment, tribal public policy, or Native American health care. Sophie plans to pursue a career in environmental research, possibly as a college professor. The 2014 Udall Scholars were selected  from 489 candidates from 228 colleges and universities.

Phyllis Goode ’16 was awarded a Boren Scholarship to study in Shanghai, China, where she will focus on Intensive Chinese Language studies as well as Chinese culture and history. The Boren Scholarships, sponsored by the National Security Education Program, are awarded to provide important international and language components to students’ educations in world regions critical to the future security and stability of the U.S. In exchange, Boren recipients agree to work in the federal government for at least one year. Of 868 Boren Scholarship applications, 165 students received awards.