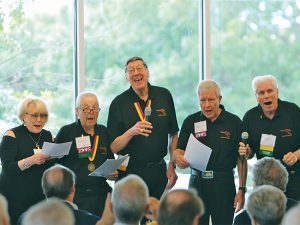 The Four ACs, plus one, performed at the Golden ’Roo celebration in May 2017, having also thrilled audiences at the 2016 event. The barbershop group formed in 1964 to travel with President John D. Moseley to entertain at fundraising events; he said he received larger checks for the College when they sang! The group also was known for serenading outside the women’s residence halls after evening curfew. Left to right above are Ruth Ann Parker (the plus one and wife of Gary Parker); Bill Vandivort ’66, tenor; Mickey Bonesio ’66, lead; Andy Sansom ’68, baritone; and Gary Parker ’67, bass. 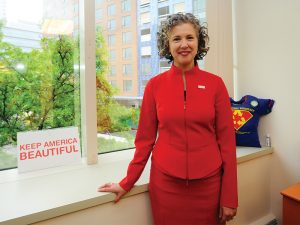 In May, Helen Lowman ’88 became president and CEO of Keep America Beautiful, a national nonprofit that envisions a country in which every community is a clean, green, and a beautiful place. More than 5 million volunteers work through over 650 community organizations and affiliates.

Helen has more than 20 years of leadership experience in international diplomacy and development, youth engagement, environmental education, disaster resilience, global leadership,  volunteerism, social justice, and human rights. She served as an appointee of President Barack Obama in the senior foreign service and the senior executive service from 2010 to 2017, most recently with the Federal Emergency Management Agency (FEMA) in Washington, D.C. She also has held several leadership roles within the Peace Corps, working in the U.S. and abroad. She began her Peace Corps involvement in 1988 as a volunteer in Thailand.

“Keep America Beautiful’s strong grassroots affiliate network reflects the diversity of America, and is engaged in meaningful volunteer work that empowers and enriches the communities we serve,” Helen said. Early in her career, she served on the boards of Keep America Beautiful affiliates in Austin and El Paso while working with the Texas Commission on Environmental Quality.

Helen holds a master’s degree in international economics and development at the University of Denver Joseph Korbel School of International Studies. She is pursuing a Ph.D. at Antioch University in the Graduate School of Leadership and Change. 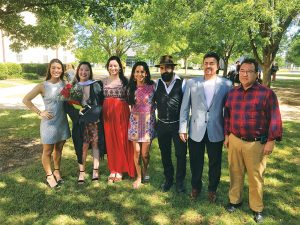 The Garcia brothers—Gilbert, Edward, and Michael—all attended Austin College. Gilbert’s daughters Montine and Karah decided in high school that they would follow their dad’s footsteps, and they applied only to Austin College. While they were students, their cousins, Margaux and Victoria came to visit, and they, too, applied only to Austin College. The entire family came to cheer on Victoria for Commencement 2017, and all will return in 2018 for Margaux’s graduation as she continues toward her dream of a career as a physician. Today, Gilbert is a pediatrician in Houston, where Edward is an insurance agent. Michael is a reading specialist in Austin, Texas, where Karah works as a librarian. Montine is a special education teacher in Maryland.