Home » Miscellaneous » One Student at a Time 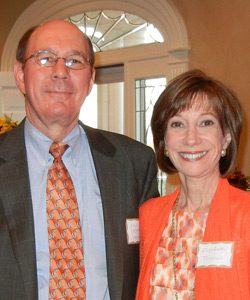 Ray and Elizabeth Thomas have only three children, but they have paid the bill for college more than 40 times.

“We feel the hope of the future rests in an educated population. To us, scholarships are an opportunity to provide the lasting benefits of an Austin College education to excellent, hard-working students who might otherwise not have the ability to experience it,” Ray said. “This is one way we try to make the world better.”

Elizabeth attended the College because of a scholarship from the Moody Foundation, which supports high-achieving students from Galveston County. “I came from a poor family and would not have attended Austin College without a scholarship,” she said. The Moody Foundation scholarship paid half of her college costs, allowing her to earn her degree and also complete a master’s degree through the Austin Teacher Program.

Elizabeth’s scholarship “shaped our destiny,” Ray said. “We dated at college and married two years after graduation while I was still in medical school. We realized the literal life- changing potential of scholarships.”

The couple did not give to the College as young alumni when Elizabeth was supporting Ray through medical school on her $7,000 teaching salary, but eventually Ray was established as a dermatologist at Texoma Dermatology Clinic. Their own early experiences set a pattern for their philanthropy.

“Since we were very poor growing up and as a young married couple, we always counted pennies and made every dollar count. We turned off lights and raised thermostats,” Elizabeth said. “We prefer to give to organizations that don’t waste money. Since Ray is on the Board of Trustees at Austin College, he knows how carefully the budget is developed. We know when we give a scholarship, the money goes directly to a student.”

“Being on the board, I see how organized and fiduciary the school is with its gifts,” Ray said. “Donations to Austin College are used wisely and that is how we expect our donations to be used.”

Since they began supporting the College, the Thomases have gotten more involved. They attend donor events, lectures, concerts, and dinners at the College, and are proud that one of their donations helped build the Wright Campus Center.

“We look at that building and remember all the donations that went into its construction. It will be serving students long after we are gone,” Elizabeth said. “All the people at Austin College are grateful for our money. Our scholarship students, the president, the vice presidents, the administrative assistants, the people who run the food service, etc., know us and smile at us and thank us. It is a pleasure to be part of a team with such high standards working toward such worthy goals.”

Ray and Elizabeth practice their servant-leadership by encouraging others to consider supporting the College. “The lasting benefit you can accomplish by donating a scholarship is exponential. You are giving an education to a person who has the potential to change the world,” Ray said. “How often do you have that opportunity?”