Beginning in 2017, the Austin College football team will compete as an affiliate member of the Southern Athletic Association (SAA). Both Austin College and Trinity University will join the SAA in football only, continuing membership in the SCAC across all other sports. 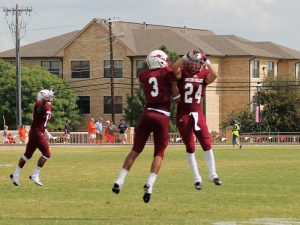 “We are so pleased that Austin College has the opportunity to reconnect with other NCAA Division III liberal arts schools in football,” said Austin College President Marjorie Hass. “We have 16 varsity athletic teams, and 15 will continue to enjoy robust competition with the schools in the SCAC. The last few years, we were challenged in that few of these fine schools have football programs. This admittance into the SAA provides a solution that is the best of both Division III athletic worlds; football competition in the SAA, with our other 15 varsity sports competing in the SCAC.” 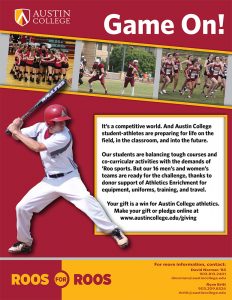 “I’m very grateful that our administration has worked to make this possible,” said Kangaroo head football coach Loren Dawson ’91. Athletics director David Norman ’83 (MAT ’84) joined the coach in expressing excitement at the conference change. “This opportunity reinforces the overall commitment of Austin College to continue to provide the best student-athlete experience for
all of our participants,” Norman said.

As an affiliate member of the SAA, the Austin College football team will be able to compete for an automatic bid into the NCAA Division III Tournament. The SAA is one of 25 conferences whose regular-season champion receives automatic qualification for the national championship field.

The SAA was formed in 2011 and began play in the 2012-2013 academic year, consisting of former members of the SCAC as well as Berry, which at the time was an independent program. The league is headquartered in Atlanta, Georgia, and includes Oglethorpe University as a non-football-playing member. Washington University (St. Louis) and University of Chicago also are affiliate members in football.

Named to the Hall of Fame 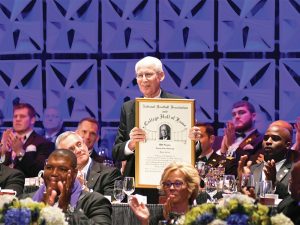 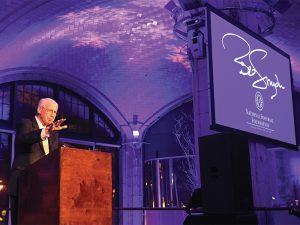 A five-time National Coach of the Year honoree and seven-time Conference Coach of the Year recipient, Snyder served as an assistant football coach and offensive coordinator for the Kangaroos in 1974 and 1975. He received Austin College’s Coach Joe Spencer Award for Meritorious Service and Lifetime Achievement in Coaching in 2007.