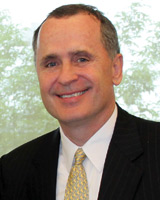 Todd Williams ’82 stepped into the position of chair of the Austin College Board of Trustees upon the retirement from that role of Robert Johnson ’53 last November. Todd has served as a member of the board since 2001 and as vice chair for several years.

After retiring from a successful career with Goldman Sachs in 2009, Todd turned his attention full time to education. He is the founding executive director of Commit!, a non-profit organization supporting educational efforts in Dallas County. He also serves as education policy advisor to Dallas Mayor Mike Rawlings. He and his wife, Abigail, chair the regional advisory board for Teach For America in Dallas/Fort Worth and helped establish Williams Preparatory School, a K-12, free-tuition public charter school operated by Uplift that educates more than 1,100 primarily low-income children in northwest Dallas. Todd previously served as vice chair of the board for Uplift Education.

While at Goldman Sachs, Todd served as both a partner and global co-head of Goldman Sachs’ real estate private equity investment area, retiring after 20 years with the firm in its New York, Los Angeles, and Dallas offices. The Williams name is a familiar one on the Austin College campus due to generous support of programs such as the Williams Student-Managed Investment Fund, the Williams Executive-in-Residence Lecture Series, and the Global Outreach Fellowship Program. Todd and his family also have provided support for the Sandra Williams Founders Plaza and the Thomas R. Williams Intramural Complex, in honor of his parents, as well as other campus facilities and landscaping, and provided funding for several scholarships.

Becky Russell Sykes ’67 now serves as vice chair of the board.