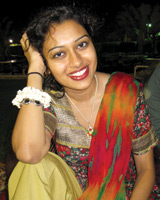 When Sameen Wajiid ’13 returned in 2011 from an Austin College Global Outreach Fellowship to Karachi, Pakistan, she realized her world had changed. “When you have a life-changing experience,” she said,“how do you make it impact the rest of your life?” Applying for law school with plans to work in human rights, she obviously has a plan for the future. But she’s not waiting to make a difference.

Though Sameen lived in Pakistan until she was 5 years old and has made several trips there to visit family, she had no idea what she would discover when she traveled there in 2011 to work in an orphanage. While interacting with the children, she talked with the young girls about their futures. They told her that they would likely work as maids and had no ambitions beyond that. Sameen was shocked by the response. Recognizing the reality of poverty there for the first time, Sameen realized the lack of educational opportunities and the cycle of poverty that results.

Her glimpse into the lives of a handful of girls and women grew into something much more than new cultural awareness. “No one can really understand poverty unless you’ve lived in it,” Sameen said. “The GO Fellowship takes you as close as you can get. I witnessed the hardships and substandard living and the lack of opportunities in their upcoming future. I really felt for these women and knew something had to be done to help them overcome their societal, cultural, and financial barriers.”

After returning to the U.S. and speaking with her sister Zareen, who recently completed a master’s degree in international business, the idea emerged to start a website to empower the women of Pakistan to use their talents in sewing or craft making and sell their products online. The sisters formed JashnaDesign.com with hopes to utilize the women’s strengths and skills to help them help themselves. On their own, the women could not afford the supplies and had no market for their goods. The sisters provided seed funds and a market. Those who had no skills received money to purchase scarves and similar items in Pakistan (at local prices) and sell those on the website.

Sameen thought she would have to seek out women to take part, but the word has spread quickly. “These women have talents, but they were not able to use them to escape their circumstances,” Sameen said. “We don’t want to just give them money; no one wants charity and they can’t continue on their own. But through the website business, they can earn money for themselves.”

JashnaDesign.com went into operation this fall. Since Sameen is still in school, she doesn’t have as much time as she would like to work on the project, but the website now includes shoes, scarves, wallets, and jewelry. She has been amazed and touched by the reactions of others willing to help.

Stories of the women in Pakistan are included on the website to offer insight into the women making the products. “Poor economic conditions, the lack of education, and the need for survival drive these women into a vicious cycle of lifelong servitude,” Sameen said. “It is amazing to be able to help through these efforts.” On the website, the mission is clear: “When you make a purchase at Jashna Design, you are helping women in Pakistan.…We want their work to be worth it. We want to support them in their ambition to help provide for their families. We want to encourage them to rise above their conditions and build a better future for themselves and for those whom they love.We would sincerely appreciate your help in helping them achieve their goals and dreams.”

Sameen is supported by an Austin College Dean’s Scholarship.