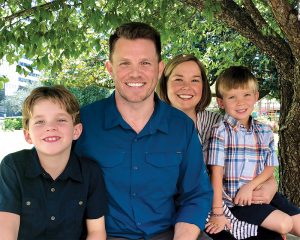 Henry Owen ’05/MAT ’06 is Executive Director of John Knox Ranch, a Presbyterian summer camp and retreat center near Wimberley, Texas. He grew up in the Presbyterian Church and continued his leadership and spiritual development at Austin College through the ACtivators program. After graduation, he taught second grade in Austin, Texas, for a few years before he and his wife, Emily J. Richardson Owen ’05, moved to Charlotte, North Carolina, where he established a nonprofit project, Friendship Gardens. Before moving to John Knox Ranch, Henry spent four  years as Executive Director of the Nature Discovery Center in Houston. Emily is a former John Knox Ranch camper, an ordained Presbyterian pastor, and has practiced ministry in a church setting  and as a hospital chaplain. She currently serves as pastor of Hyde Park Presbyterian Church in Austin. Together they have two sons, Jack Henry, 8, and Ross, 5, who Henry says might be the most excited in the family about living at the Ranch. Owen said he looks forward to opportunities to strengthen the partnership between Austin College and John Knox Ranch.