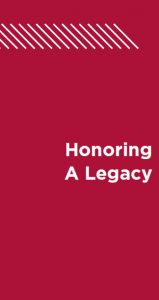 Lemuel Scarbrough Jr. made his first Annual Fund gift to Austin College upon graduation in 1958. The Austin businessman was a faithful donor to the College over the next 50-plus years and remained connected to faculty and staff at his alma mater.

Throughout his life, he made substantial gifts to permanently endow scholarships and created the Lemuel Scarbrough Summer Research Endowment in honor of Dr. Paul Beardsley and Dr. Clyde Hall, who had influenced him during his Austin College years. That gift has allowed many Austin College students to complete summer research projects in the humanities and social sciences. 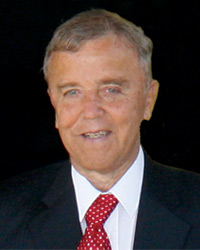 Mr. Scarbrough died in September 2016 and was celebrated at the October meeting of the Austin College Board of Trustees. At that gathering, President Marjorie Hass announced one of the largest gifts in the College’s history—a $7 million bequest—from Scarbrough’s estate. “We honor tonight the life and legacy of a dedicated Austin College alumnus,” Dr. Hass told those gathered. “Mr. Scarbrough’s foresight and love for the College have allowed us to receive timely support for innovation and momentum in our goals,” she said.

This transformative gift allows Austin College to move forward with a priority of the 2015-2020 Strategic Plan. The College is using $1 million of Scarbrough’s gift to create and endow the Lemuel Scarbrough Center for Writing. The remainder of his gift has been placed in a board-designated, new-initiatives fund for future use.

The Strategic Plan emphasizes the importance of written communication as a cornerstone of the liberal arts education and includes plans to enhance students’ writing skills through curricular and co-curricular programming. To that end, a faculty committee had been working on the curricular needs and planning for creation of a writing resource center once funding became available. Dr. Greg Kinzer, associate professor of English and chair of the English Department, is chair of the Writing Center Task Force. He is pleased to see the realization of the next step forward. “The Lemuel Scarbrough Center for Writing will serve as an exciting new community hub for writing at Austin College, fostering a culture of writing on campus,” Kinzer said. “Through the center, we will encourage all students to develop an intentional practice of writing that will help them grow as writers and thinkers to better engage with the world around them.” A national search is underway for a director for the center.

Board of Trustees Chair David Corrigan ’81 of Dallas, like Scarbrough, was a member of Phi Sigma Alpha fraternity, and joked that $7 million gifts are the sort of things all Phi Sigs do. More seriously, he echoed the thanks expressed by Dr. Hass and commented on the importance of planned giving. “Mr. Scarbrough’s life serves as an inspiration for each of us as we see the impact we can make on behalf of the College throughout our lives—as well as the tremendous potential of our future legacy gifts,” he said.