Home » Miscellaneous » A Penny and A Promise 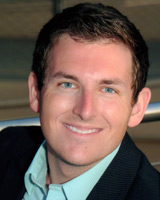 As he walked across the stage on Hall Graduation Court, Tom Buttine ’07 stopped to shake President Oscar Page’s hand, just like all the other graduates. But then he did something else: he gave the Austin College president a penny.

“He was a little confused, but I told him there were a lot more to come,” Tom said.

Since then, Tom has made a concerted effort to regularly give back to Austin College. He gave $1,200 to the NOW Scholarship fund this year, an uncommonly large amount for a young alumnus.

While in school, Tom relied on several scholarships to support his education.

“Without the scholarships to get my education, I wouldn’t have been able to go,” he said.

“Education all around is not cheap these days, and at one point in my senior year it cost me less at Austin College than it would have cost to go to UT (because of the scholarship support). That was a relief at a time when my family had some financial difficulties, to help me focus on school and to focus on getting a job after school.”

Majoring in economics and business administration, Tom made the most of his education. He served as treasurer to the Student Assembly, was a member of the Gamma Gamma Gamma fraternity, founded the Business Club, conducted economics research, studied abroad in Europe and Australia, and spent one January Term in New York City.

“I studied architecture in New York, and it was interesting because that actually came up in an interview while applying for a job, when the interviewer was sort of challenging the value of a liberal arts education in banking,” he said. “It was something none of my peers could have offered.”

Tom found a job with Accenture in Dallas—“but it’s probably more appropriate to say I live on American Airlines,” he joked, because he travels so often. At Accenture he works with the insurance side of the international management consulting, outsourcing, and integration firm’s business.

Though he also gives to other organizations, Tom feels particularly close to his donations to the College.

“With Austin College gifts, I feel like I know the person that’s getting it. While they won’t be exactly like me (and I don’t want them to be) I know my gift is helping open doors to the future of America to a pretty good crop of students,” he said. “I feel like a lot of our innovators or scientists or artists could come out of Austin College.”

One faculty member in particular helped Tom connect with the College—Associate Professor of Economics Dan Nuckols.

“In the end of my freshman year, I was disappointed. I had realized it may not be easy for me to get a job right out of school and was thinking about transferring. But I used Danny as a mentor, and he helped me open my eyes,” Tom said. Danny showed him the value of his liberal arts education; he was being taught how to think, not just how to appeal to future bosses.

And Nuckols’ guidance extended beyond graduation, too.

Nuckols encouraged Tom “to think about if I want others to have the experience of coming in narrow-minded and then leaving with the blinders off,” he said. “That’s the reason I give back to the school.”

And he is glad he stuck it out for his liberal arts education.

“One thing funny about coming out of Austin College is that when you do graduate and get thrown into that first job—at first your peers from state schools tend to be a bit ahead, because they had very specific classes about ‘trade jobs.’ Those classes teach you how to do the job,” he said. “But Austin College taught you how to think. So we start a bit behind, but before long we’re the ones people come to, to answer questions, because we know how to think something through logically, rather than just getting the answer out of a textbook or with an equation.”