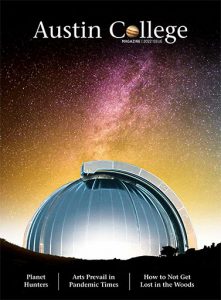 From the President
I like quotes. I like how a single sentence or two captures the essence of something, makes you see something in an entirely new way or simply inspires.

…Worth a Thousand Words
Fire. Ice. (…and everything in between.) The year 2021 was another one that defied description in a tidy bundle of words.

Planet Hunters – Student Researchers Collaborate with NASA
While SpaceX, Blue Origin, and Boeing are paying and paving the way for innovative access to space, physicists continue the ancient scholarly work of studying the stars.

Austin College Can Feel Like Home – For Everyone
Carllos Lassiter says he has found a place he can call home. Austin College’s new Vice President for Student Affairs and Chief Inclusion and Diversity Officer arrived on campus shortly before Fall Term 2021 began, and soon, he was involved in much more than arranging an office and orienting his staff; he was “settling in.” 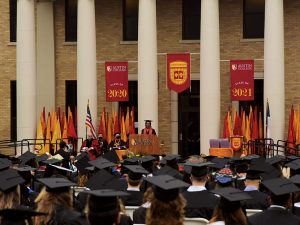 More than 250 Class of 2021 graduates proudly received diplomas in May 2021—and shared the commencement stage with many Class of 2020 alumni. The 2020 ceremony had been postponed a full year due to COVID restrictions, though graduates received their diplomas in May 2020. Not everyone could return to campus, but those who did were excited to walk across the stage and join in the festivities.

The Joy of Giving While We’re Living
When Larry Sykes graduated from high school in Fort Worth in 1962, friends from his Presbyterian church were already attending Austin College; it seemed a good idea that he would, too. The next year, Becky Russell enrolled at Austin College at her Dallas Presbyterian church’s urging and her parents’ instruction.

They’re Somethin’ in the Water
During its very first season as a varsity program in spring 2019, Austin College’s women’s water polo team finished as conference runner-up and according to their coach, gained an amazing statistic: the first team in NCAA history to qualify for a conference championship game as a first-year program.

How Many Laps Make A Champion?
I was born in 2001, six weeks early and with a plethora of birth defects. My parents were told that I would not live through the night, but I survived. I was already defying the odds!

An UP and Coming Sport
STUNT, the sport, is the fastest growing female sport in the country. It’s in line for recommendation as an NCAA “emerging sport,” and competition will only grow in coming seasons. Austin College is ready.

ON THE COVER: Austin College’s Adams Observatory, atop the IDEA Center, invites today’s explorers to search the stars.

Arts Prevail in Pandemic Times – Gloria in Excelsis Deo
It has been nearly two years since COVID-19 made its indelible mark on the world’s timeline. Among other things, the prospect of welcoming an audience to a concert or special event was replaced by concern for the health and safety of all.

How to Not Get Lost in the Woods – Austin College Launches First-Generation Programming
Among Austin College students, about one of every four qualifies as a first-generation student. A first-generation student is one whose parents or guardians have not completed a bachelor’s degree, or whose parent may have earned a bachelor’s degree in just the past two or three years.

ON THE BACK COVER: Magnificent Climb by Mary Wright 2018, Acrylic on Canvas

From Ida Green to the LA Scene – Swann Excels as Hollywood Producer
William Swann ’04, Head of Entertainment at Bartle Bogle Hegarty (BBH USA), works in Los Angeles as a creator and executive producer in the highly competitive field of television/film.

In Other Words – Gifted Students
When I arrived on the campus of Austin College in September of 1964, I immediately felt overwhelmed by the number of gifted students I encountered who were obviously far more talented academically than I could even imagine.